Welcome to the first 5 pages of

“Treasures of Darkness – A Prison Journey” 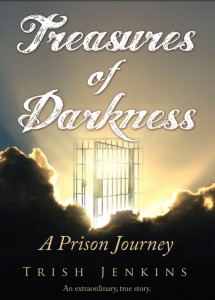 It was July, 2009. I lay on my back on the empty prison tennis court gazing up at the sky. It was the only time in S1 where there was not a cage ceiling above my head. I still remember how blue the sky was. Our 1 hour of exercise time outside was almost up.

The other 5 women from my unit had already gone back into the block for a cigarette or a cold drink. From a short distance the voices of some Murri (Aboriginal) girls called out to me from their unit windows facing the court, “Hey, Sista-girl! You ok? Whaddayadoin?”

I waved a lazy hand to them and smiled. I felt the blue sky like I felt the breeze, soaking it in. It had been so long. I reached up swirling my hands in figure eights. I knew I looked crazy but I didn’t care. There was no wire, no bars between me and the deep blue sky.

I blinkered my eyes with my fingers to block the wire side fences from my peripheral view. That’s better. I imagined I was free. It felt like for once I was cheating the system that so thoroughly controlled each area of my life, covering me in greyness.

I was six months into an eight month sentence. Each day felt like a week, each week like a month. This particular stint in S1 was supposed to be a punishment for an incident that got me kicked out of the minimum security facility known as Helena Jones Community Centre at Albion in the heart of Brisbane. Instead, S1 was a relief. The conditions were Spartan but felt more like a spiritual retreat giving my shattered nerves rest.

The women I shared a unit with were supposed to be the worst, but I found them very easy to get along with. How sad to be in a category where you are considered bad even by prison standards! How much rejection can a person take?

I liked these women better than the catty ones who acted superior. These ones didn’t have to prove how tough they were. They didn’t get caught up in politics or nasty backstabbing. They called a spade a spade; well actually, they called a spade a #$%&* spade, but I hardly noticed. I just saw precious women being their kind of normal.

They thought I was a bit odd but harmless. I was a “one-eighty-straighty,” (both morally and socially). I didn’t swear, didn’t “swing,” was “nice,” and one of them “real” Christians; possibly misguided but well-intentioned. They indulged me. I liked them.

Perhaps I was seeing them the way God sees them?

If someone had told me in January 2009 that less than 2 years later I would be on a platform speaking to 500 people about my prison experience I would have blinked in bewilderment.

Yet that public “outing” was just the beginning.

I’d been so ashamed I didn’t want anyone to know of my failure.

Imagine the worst thing you’ve ever done, the thing you are most ashamed of, eternally available for the public with just one click on Google!

The loss of personal freedom and dignity affects people differently. For some, prison is an escape from the perils of a violent home or even homelessness. For others it is where they catch up with friends, who lead an equally lawless lifestyle. For many, it is just plain damaging.

When asked about what being in prison is like, I sometimes wonder which answer to give. I spent 8 months incarcerated and had a variety of locations, people and experiences. I was “managed” by people of questionable competence. It was awful and yet there were times of sublime joy each time I had a victory over the evil that pervaded.

It took time and ministry to heal from the emotional and mental hits I took. However, I was determined not to be beaten. There were times I despaired; an insidious voice taunted me, telling me I had ruined my future and was irreparably damaged, my children would have hang-ups, and I had become preaching material for pious ministers to use.

Yet in the back of my mind I always had hope. Sure I would dip into despair, tears and anger. However, what kept me rising again was my faith in God being able to make all things work together for good. My experience would not be wasted, unless I gave up.

The decision to go public was not easily made but I was convinced it was the right one. I had my first book to publish and couldn’t do it without people finding out.

My pride became less important than my message.

The feedback from “Dangerous Wealth,” (a book on financial and romantic fraud signals and bounce back), was very positive but people also wanted to know how I coped with my prison experience.

This isn’t a simplistic “how to” self-help book. I actually had to do what was needed to help myself. If that gives you some keys for your life, then that’s even better.

One thing I know. I choose what that experience means for my life. My perspective dictates my success.

You can change the past and free your future – I did!

This book is made up of three things.

1)     Letters I wrote home, which my husband Justin then typed out and emailed to our friends, most of whom were from church, but also some beautiful non-church, non-Christian friends. It turns out some of those friends forwarded the emails to other friends who then requested to be on Justin’s list. By the time I was released the email updates were going out to over 100 people and beyond.

These letters helped keep me sane. As events unfolded I would consider how I would describe them for my readers. I wasn’t there just for me. I was there for them, for you. I was not going to waste the time God had given me there. In spite of persecution from some staff and prisoners, I had a purpose. I made a difference. I couldn’t turn my back on the lowliest woman for fear of what others thought.

As it was, one of my letters got me kicked out of the Helena Jones minimum security facility and back to the Big House 3 months before my discharge!

2)     Journal entries of private thoughts and experiences. I couldn’t post these as my mail was read by prison officials. It’s interesting to compare what I let people know about at the time, with what was going on behind the scenes.

3)     Hindsight comments are italicised. It was a year before I could look at my letters again. I still find it hard to believe the journey. I look back and see things that happened from a different perspective now. I alternately want to shout a warning; or reach out and hug the naive, yet brave little person I was in prison. Sometimes when you are in a situation, you don’t realise how perilous it is.

Revisiting the memories made the nightmares return for a while. I was told I had Post Traumatic Stress Disorder and that there is no cure. I refused to believe it.

This is my prison experience, raw and real. As such you may find it uncomfortable at times. You may find it weird that I would draw on spiritual strength with such conviction. Even some believers may shudder that I shared my faith in such a hostile environment.

To the Christian I say, “If you are facing adversity and can afford to backslide, your adversity is not bad enough.”

My situation was too serious to go through without my God.

Don’t think this meant I was a perfect Christian in there.

I wasn’t like biblical Joseph in ancient Egypt. I wasn’t Corrie Ten Boom, ever forgiving the guards in a Nazi prison. I lost my cool occasionally. I did not act very “Christian” at times. I was living among some very nasty, small minded, unsavoury characters… and then there were the prisoners…

There is a misconception that non-violent offenders are kept away from the really bad offenders. It’s not true. Apart from those in S10, a secure block referred to as “Protection” (accommodating ex-police officers, child abusers, those with enemies), everyone is lumped together until they are “classified.” This can take months, although it isn’t supposed to. I lived with murderers, thieves, drug addicts, prostitutes and more. But I often felt the presence of God with me. I was not alone and believed (because I had to) that my journey would result in a greater purpose.

Now I use my story to impart life, purpose and hope into the lives of others.

Prison is a horrible experience regardless of whether your prison is made of bricks and razor wire or made of your attitude and life circumstances.

True freedom is a precious thing.

I just ask that you keep an open mind as you journey with me. Perhaps you will gain strength and maybe some faith of your own..?

Journey with Trish to discover Treasures of Darkness.

Save on postage by clicking here. Then use the “add to cart” button under the book picture.

Purchase from the eStore here and I will post it to you from Brisbane.

"Trish kicked off our National Conference, she set the whole tone and to date, this was our BEST!"

"You framed a difficult topic with warmth and humour. Confronting and valuable."

Absolutely NAILED the topic for us!

"The feedback from our audience was very positive!"

"I will definitely be inviting her back to speak!"

"It's been a pleasure working with you! Great work with my team."

"You had a profound effect on our people!"

"These people are used to having people listen to them.
Within minutes of opening her heart and soul with her experiences and knowledge learnt, Trish had the same room LISTENING!

"Trish was inspirational, yet real and people could relate to her."

"Absolutely wonderful and well received by our audience. Quite emotional, very inspirational!"

"We were delighted to have Trish speak at our Midwest Region Spring conference. What an inspiration she is !!!!"

"Trish was so inspiring, I can't wait to start reading her book!"

"I enjoyed the raw and honest energy you displayed, telling us just ‘how it is’ without beating around the bush!